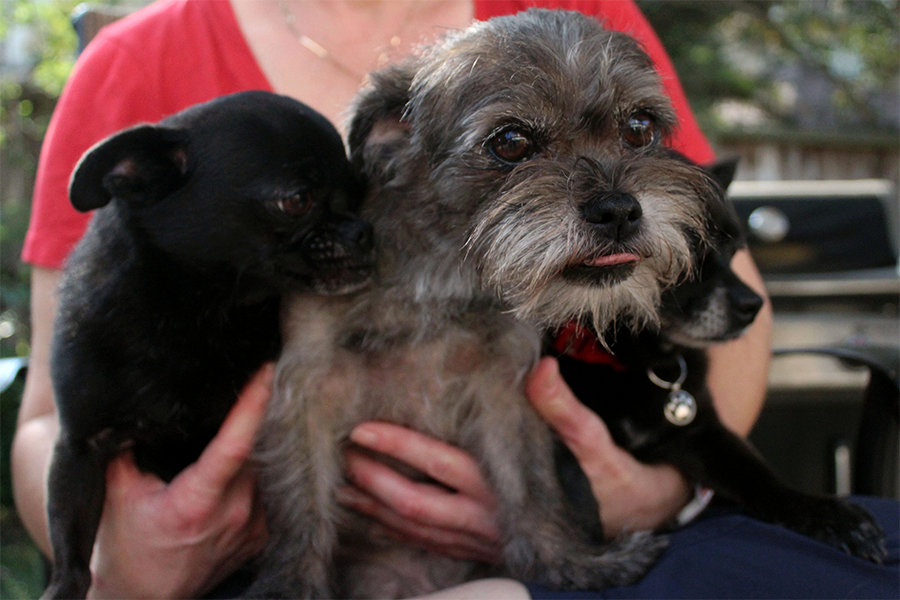 The smell of a new home, the feel of a new bed, the excitement of new owners, these are the feeling of a newly adopted puppy. However, some dogs aren’t as fortunate, according to the ASPCA, around 670,000 dogs are euthanized in shelters every year. But senior Patrick Doyle and his family have been fostering animals for about 10 years now to prevent these numbers from increasing.

After saving a pug from the side of the road, Patrick’s mother, Catherine Doyle was led to the opportunity of fostering, which she soon came to found out was her passion.

“My mom likes dogs,” Patrick said. “She’s been working with animal rescues, and they need people because otherwise, dogs get sent to shelters, and a lot of times they get euthanized because they have too many. So we help out and take in dogs and help them get adopted.”

Catherine works at the Montgomery County Animal Shelter where she is the rescue coordinator. This was a “natural progression” from fostering.

“There is a huge pet overpopulation problem here in Houston,” Catherine said. “If you go into the shelters, you will see the number of animals that are suffering. Either they’re in ill health, or they’re not well fed, or they’re emaciated. There’s multiple reasons why one would want to foster.”

The Doyles are currently only fostering one dog, but have six of their own.

“It’s loud because dogs bark a lot,” Patrick said. “But I mean it’s fun. You get to play with puppies a lot and when they get adopted, we get new ones. So it’s fun to play with the new ones.”

However, fostering is not just being able to play with puppies.

“The struggles that come with fostering is keeping your house clean and the sense of frustration that it never ends,” Catherine said. “It’s not like there’s really a con to fostering. It just takes a lot of time because you are always dealing with the dogs, and some stuff doesn’t get tended to like it should.”

The Doyles do not foster all alone. They have the help from senior Madison Myers and her family.

“Whenever Patrick’s mom or Patrick get overfull [overcrowded] with foster animals, they call me or my mom,” Myers said. “We take two or three puppies at a time and help to basically not have them so overfull.”

According to Catherine, there is a lack in people willing to foster, which is a big problem because of the overpopulation of dogs in Houston.

“There’s not that many people who will foster,” Catherine said. “But when you do find a good one, like the Myers whose whole family helps out, it’s good.”

On average, the Doyle’s foster up to 10 dogs a month, which is around 10 more dogs that get out of the shelters and find homes.

“The more puppies and animals we can get off the street, it helps immensely,” Myers said. “I feel like the animals, when they grow up in a family setting like that and they play with kids and they’re around humans and not just in a cage, it helps them in the long run to grow and be a better animal.”