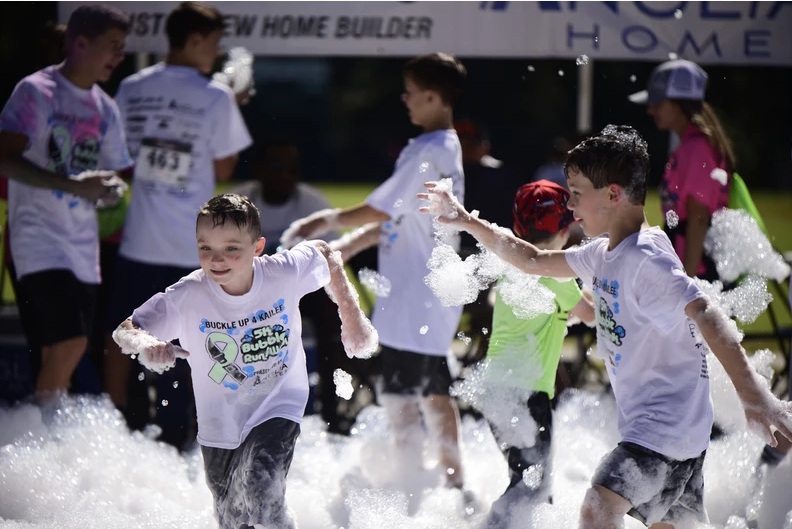 Participants in the bubble run range in all ages, from elementary to retirement age.

The Kailee Mills Foundation was created in 2017 after the death of Kailee Mills in a car accident. Its mission is to help inform the public of the importance of seat belt safety. The Sunday before last, the foundation held a bubble run to promote their cause. It helps the foundation raise money in a way that allows everyone in the community to enjoy.

“Kailee’s death still affects me,” a close friend of Mills, Hannah Stamper, said. “Her family and I have always been close, and I still struggle with her passing today.”

After unbuckling her seat belt to take a picture on her way to a Halloween party, the car she was riding in rolled over, and Mills died instantly.

“Everyone was caught off guard [when she died],” Stamper said. “Kailee was a model student, so when she passed, it was a huge eye opener for the importance of seat belt safety. I have had several people come to me with stories where, if it wasn’t for Kailee’s memory, they wouldn’t be here today.”

After Mills’ passing, her parents created the Kailee Mills Foundation to help prevent future deaths in the community. The non-profit quickly spread across the country and became known worldwide.

“We wanted to make sure another family didn’t have to go through what we went through,” Kailee’s father and President of the Kailee Mills Foundation, David Mills, said. “We had to wake up every morning without her there. Our family will never be the same. You can either let it destroy your life, or do something to honor and remember that person.”

Car accidents are the most common cause of death in the US, and especially prevalent in teenagers. According to the National Highway Traffic Safety Administration, most teenagers killed in car crashes weren’t wearing a seat belt in 2016.

“I know a lot of my friends used to not wear their seat belts,” junior Faith Wilemon said. “I know more people who have gotten in accidents since Kailee has passed, and have survived because they were wearing a seat belt.”

Events like the bubble run help the foundation by promoting their cause and raising  money to go back to the community. The Kailee Mills Foundation helps families who have had a relative die in a car crash by providing scholarships and aiding in paying for funerals.

“Every time we speak at an event, we have to relive that [tragedy],” David said. “It’s those that have been in a car accident and have survived because of Kailee’s story that keeps us going.”

The Kailee Mills Foundation features both Mills’ story and others who have died while not wearing a seat belt.

“[Kailee’s parents] are the strongest people I have ever met,” Stamper said. “They [took] their own tragedy and changed it into something that is truly making a difference in the world.”