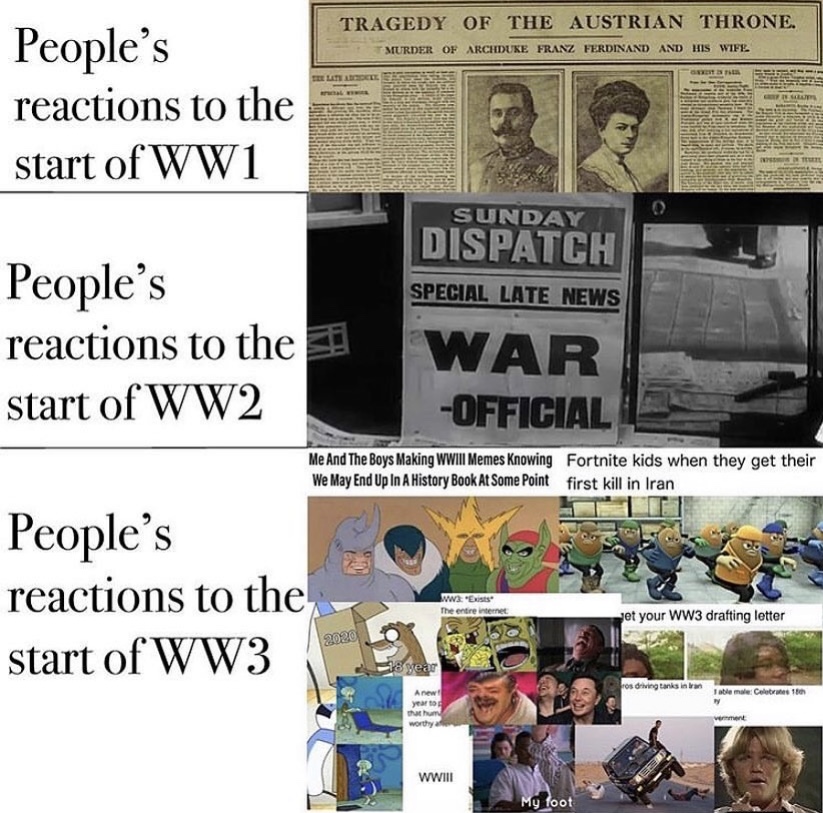 Although high tensions have risen between Iran and the United States, nothing is as bad as social media is portraying it to be.

The biggest reason for this misunderstanding is the memes. As soon as news struck about the alleged war, social media users went to work. Millions and millions of photos were uploaded to social media mocking President Trump, Iran and how everyone would be drafted and sent to war. Here’s a quick refresh if you don’t know what a meme is. A meme is pretty much a picture of a person, animal or object with a written caption or funny quote, which is constantly posted on social media.

In an article from CNN, Mark Price explained that, “It was a huge shock. I actually completely forgot about the subreddit until it started growing last week,” Price told CNN. “I think memes just happen whenever there’s a big cultural event, regardless of the nature of it. A few years ago, a movement seemed to start where the darker the joke was, the more popular the meme was and I guess these new WWII memes are just an extension of that.”

Dispute the news of the war being a huge misunderstanding, people made things bigger than what they were. Don’t believe everything you hear on the internet, even though the facts may be true, information can be misread or stretched. In an article from CNN Jamie Withorne states, “I think the language used specifically in the memes is particularly interesting and perhaps indicates that the people making them are not familiar with international conflict.” “I think this unawareness of the linguistics they are using is indicative of an unawareness about the nature of conflict itself and could be potentially dangerous as tensions continue to rise.”

Although the news is not being very significant, there’s much to pull from this. At least 17 thousand soldiers have been sent overseas. Thousands of families have been separated in order to uphold this country’s protection. In an article on CNN, Lt. Col. Mike Burns states “We have traditionally held the responsibility of maintaining the Immediate Response Force, able to deploy anywhere in the world in 18 hours. And that’s something we take pride in doing.” Yet even with that sense of pride, “the families may be experiencing some angst because the soldiers can’t tell them exactly where they are … naturally, that’s tough,” Burns said. “But what we can reassure the   families is the paratroopers are trained, they’re fit, and they’ve got their battle buddies to their left and right to help them through the situation.”

In a nutshell, there will be no war, but most likely a constant continuation of memes on the internet. Although all this may be true, I think the most important lesson we learned is to stay aware of what is going on in your country because you never know what can happen.