The Health of Journalism 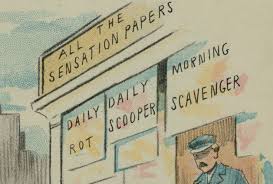 In the time of yellow journalism, titles were sensationalized to strike fear in the hearts of Americans everywhere.

As the ball in New York began its descent and as the clock counted down the seconds until midnight into the new decade, the famous defender of the First Amendment, the Newseum, shut its doors for the final time on Pennsylvania Avenue in Washington, D.C. As the Newseum closed, it sparked a thought in the minds of journalists everywhere: what is the future of journalism?

Is it the fate that seems to be impending on every job in America, snatched away by robots or is it reverting to its old forms of hate columns, written under witty pseudonyms or is it something entirely different?

Since no one is currently a proven fortune teller or a psychic, that question is nearly impossible to answer. But, another question also comes to mind, how did we get here?

To answer this, it is important to go back to the beginnings of American journalism, to the original newspapermen. These journalists were characterized by their hate columns, written under pseudonyms like Vindex the Avenger (Samuel Adams) or Silence Dogood (Benjamin Franklin). In the hate columns, they ridiculed the taxation without representation style of the British monarchy and the monarchy itself, more specifically King George III.

Some journalistic scholars, like Antonio Garcia Martinez from wired.com, have said “the future of journalism is more partisan and supported by more diverse revenue streams -in other words, like the journalism of 200 years ago.” In Martinez’s article, he emphasizes that we, as an American people, have begun to equate journalism with objectivity and are appalled by its’ return to divisive partisanship, but we also eat it up. In a world with Twitter and YouTube, we can’t stop watching the tug-o-war between sides: whether it is Democrats vs Republicans or stans vs haters. These new “news sources” have taken away the professionalism of journalism. Our consumption of news is no longer a newspaper in the morning or cable news at night, it is the Trending tags on Twitter.

After our founding fathers reported aggressively biased opinions, American journalism went through several more phases, like yellow journalism and the sensationalizing of John Randolph Hearst and the muckraking by the likes of Upton Sinclair and Nellie Bly. The real change in journalism in what is considered to be “The Golden Age of Journalism” started with Walter Cronkite.

Cronkite was the long time reporter on CBS Evening News. The aspect of Cronkite’s journalism that was so fascinating was his ability to tell the absolute truth. With Cronkite, it never seemed like there was a man in a mask, hiding in the corner of the studio and telling him what to say. He spoke out aggressively against the Vietnam War and brought the travesties of the war to American television sets.

The reason Cronkite has the title “The Most Trusted Man in America” is his gall to take on the wrongs in the world, even if it meant going against the American government and aristocrats that would have paid millions to shut him down. He was never afraid to tell the truth and he also set a precedent for his similarly iconic successors, like Katie Couric, Connie Chung and Diane Sawyer. All of these professionals held what our modern version of good journalism is: objective and honest.

With all of the information at our foot, we are still left with the question: where is journalism heading? The answer: who knows? We can’t predict something as ever changing as journalism. But, if we continue to head down this path of partisanship, we are bound to return to our ways of two centuries ago.