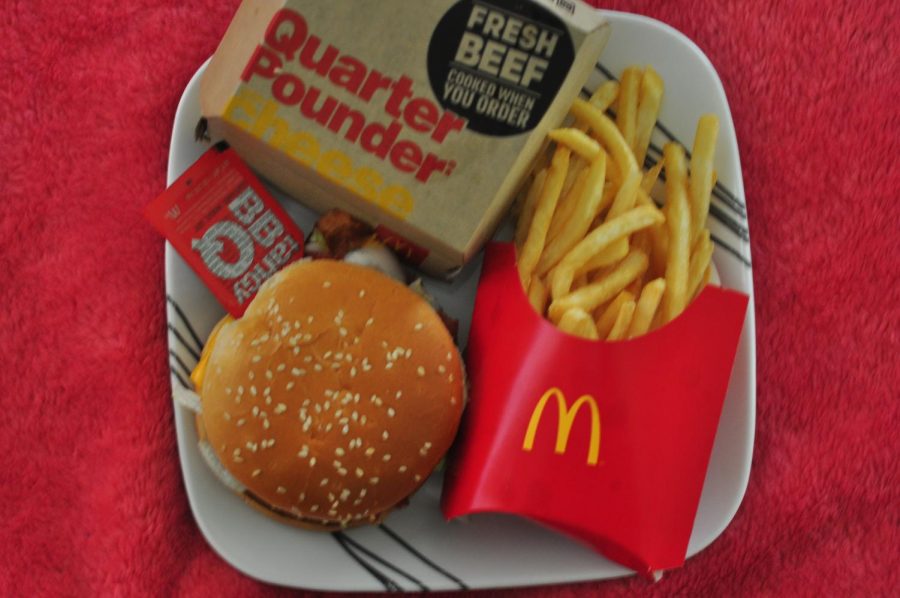 The Travis Scott Meal. ( With a pretty pink background (: )

We all know of the Quarter Pounder, and it stands as a fan favorite for a lot of us McDonald’s connoisseurs. Currently, McDonald’s has added a Cactus Jack Quarter Pounder to accompany the OG Quarter Pounder. Most people know Travis Scott from his HipHop music, his ex-Kylie Jenner or his daughter Stormi. Regardless of the lack of connection from the artists to the burger, it’s up on the menu, and I’m here to see if it’s worth the hype.
Price/Ingredients
The OG Quarter Pounder with a ¼ pound patty is $4.99, a Quarter Pounder with bacon and cheese is $5.49, and to double that patty, it’ll cost $6.69. The Cactus Jack meal is only around $6 using the McDonald’s app. That’ll get you a Quarter Pounder with bacon, cheese, extra lettuce, a medium fry, any size Sprite and a Tangy Barbecue sauce on the side. The similar retail for the meal vs the burgers alone makes this a great deal.
First Taste
I am fresh off eating the Cactus Jack Meal, and I would like to start off by announcing, Travis Scott is a burger-making genius. I came into this review with low expectations but after eating the meal. Everything is paired together really nicely, and the seemingly insignificant addition of the barbecue sauce on the side was a key reason for my satisfaction with the meal.

“I wasn’t that happy with the bacon, but I thought the sandwich with the extra lettuce and the cheese was really good,” said Desiree Jones, my mom, who eats Quarter Pounders religiously.

I, on the other hand, think that the bacon was a great additive and that the burger wouldn’t have been complete without the flavor punch. When it comes to whether the Cactus Jack burger is worth passing up the original Quarter Pounder, I would definitely say to take the leap of faith. The ingredients on the burger make the flavor steady from start to finish and that barbecue sauce can be used for the fries, the burger and maybe even the drink if you’re into that.
Final Thoughts
Travis Scott is a big industry name and despite my feelings of excellence towards the burger, it is obvious that this was somewhat of a cash grab from McD’s to Travis Scott fans. All of the items included in the meal can be bought for around $8 and this meal deal could’ve been made without Scott’s name attached to it.

With that being said, I do have to state that, The Travis Scott Cactus Jack Meal is a flavorful deal sure to make you never want a plain Quarter Pounder again. It’s worth the hype, and the money and it’ll leave you satisfied with a new McDonald’s favorite.