Teacher By Day, Cheerleader By Night 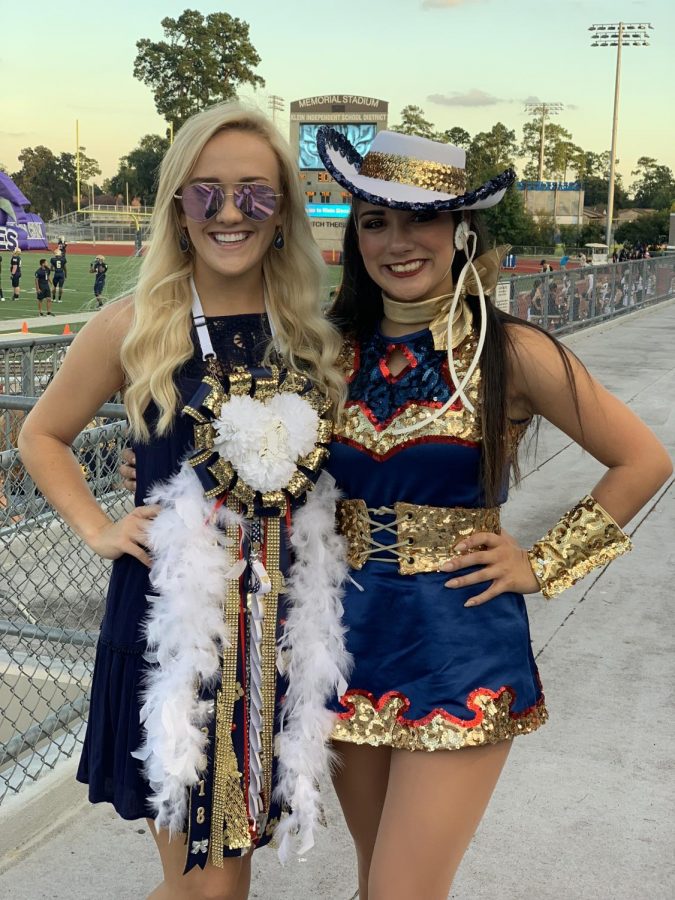 Olivia Thompson (left) celebrated the homecoming game with junior Teslyn DeLeon (right). Thompson has taught dance for eight years and has been a performer for 22 years.

Waking up at 5:45 a.m. and not going to bed until past 11 p.m. This is a typical day for Tiger Belles assistant director and Houston Texans cheerleader Olivia Thompson.

“Being a teacher has been a dream of mine since I was young but, so has being a professional cheerleader,” Thompson said.

Thompson grew up in Utah where there were no NFL teams or pro dance teams aside from the Utah Jazz. After graduating high school, Thompson moved to Texas and landed a spot on the world-famous Kilgore College Rangerette dance line at Kilgore College.

“At that point [attending Salt Lake School], I never thought I would end up where I am today,” Thompson said. “After my two years there [Kilgore College], I went to Stephen F. Austin University and majored in dance. I knew at that time I wanted to continue performing beyond college at a professional level.”

The tryout process for becoming a Texans Cheerleader is about a month long. The first day of tryouts there are about 500 “hopefuls” and at the end of the day, there are only 50. The final team is 34.

“My audition number was the 29th number called so by the 20th number I thought I didn’t make it,” Thompson said. “When she [the director] called out my number I was completely shocked. I couldn’t help but cry. It was a magical day, but I knew the hard work was just beginning.”

Thompson teaches dance to the Tiger Belles five days a week alongside the director Lauren Rodgers.

“She [Thompson] does a great job separating the two worlds [of dance and cheerleading,]” Rodgers said. “I’m proud to be able to see her on the field performing with her teammates and I know the Tiger Belles are too.”

Thompson being an NFL cheerleader also inspires her students to further their dance careers.

“It’s a really unique experience [to have a Houston Texans Cheerleader as a Director],” junior Teslyn DeLeon said. “Thompson inspires me to further my dance career 100 percent, up until this year I hadn’t considered going into college dance. Now, my college choices are all based on dance and I want to double major with dance as one of them.”

Thompson has two full-time jobs; one as a Tiger Belle director and the other as a Houston Texans cheerleader. During the weekdays, Thompson teaches Tiger Belles to point their toes and during the evenings, Thompson cheers and shouts. On weekends, Thompson has games, practices, and appearances.

“It’s a real physical challenge to handle two full-time jobs, but I take advantage of any downtime I get. I work seven days a week and most days I work for 17 hours straight,” Thompson said. “I make a very strict schedule that I stick with. I have had to make sacrifices for both jobs, but everyone is so understanding.”