Band Students March Through the Pandemic 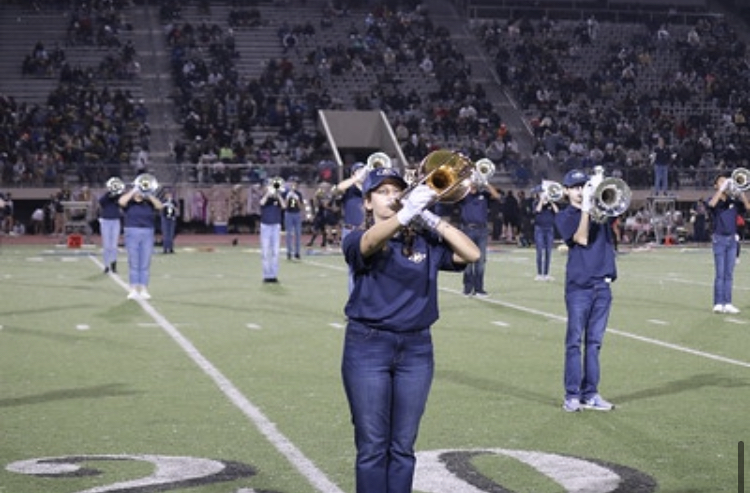 Band students line up on the field during a football game on November 19, 2020.

With Covid restrictions still present here at Klein Collins, marching band students worked hard to keep up the Tiger Spirit and play for our school’s football team despite the pressure they faced. The pandemic cut into a lot of plans last year for these students and have made rehearsal a hassle, yet they’ve persevered through it all.

This year, freshmen did not receive as much training as would be considered normal for marching band and practice has become difficult.

“We didn’t get a full summer training but we still did get to go outside on Tuesdays and Thursdays for our little practices to make sure we understood everything that we were doing,” freshman Samantha Zinck said. “Band rehearsals are definitely a lot different. With us being spaced so far apart from each other, it’s harder to hear everybody around you so you have to watch instead of listen.”

Senior Kayla Saunders has been in band since the eighth grade and plays the clarinet. She has been a drum major for three years. She expressed her discontent with how marching band has been this year.

“This year has been really underwhelming compared to last year,” Saunders said. “As a marching band, we had made tremendous progress compared to my freshman year, so everyone (especially the current seniors) was super excited to see what this year would have in store. I am sure our original marching show would have been amazing, but I am honestly thankful that we had a marching season at all. Even though competitions were one of the best parts about marching season (we did not participate in any this year), we were still able to put on a short and fun show. I also really miss getting to interact with everyone like we usually do through summer band and after-school rehearsals.”

Saunders also expressed her dismay for the cancellation of the New York trip for band students back in April of 2020.

“Initially, I was really upset about it,” Saunders said. “I had never been to New York, and I was super excited to finally go especially because I would be travelling with some of my closest friends. I was mostly upset because some other events I was looking forward to also got cancelled; however, I know that it was ultimately the safest choice to cancel the trip.”

Saunders, like many other students, still wishes that the school year would not have been interrupted by the pandemic. Despite this, she is still grateful towards the progress the band has made.

“I wish that we could have had a normal senior band experience,” Saunders said, “A lot of the seniors were looking forward to our last marching competition, last football game, last concert, etc. The list goes on. But given the circumstances I would say that everyone in band has done their best to make the most of this year. And I really hope that the underclassmen in band get to experience those special moments that my senior class missed out on.”

Amongst other things, the time that band students had to practice dramatically decreased. While they usually do more than 100 hours of practice during the summer and another 20 during the school year, this year students have had less than half of this time and there have been no competitions this year due to safety concerns. Shows have been shortened as well and marching band choreography was simplified or cut.