All about that VASE 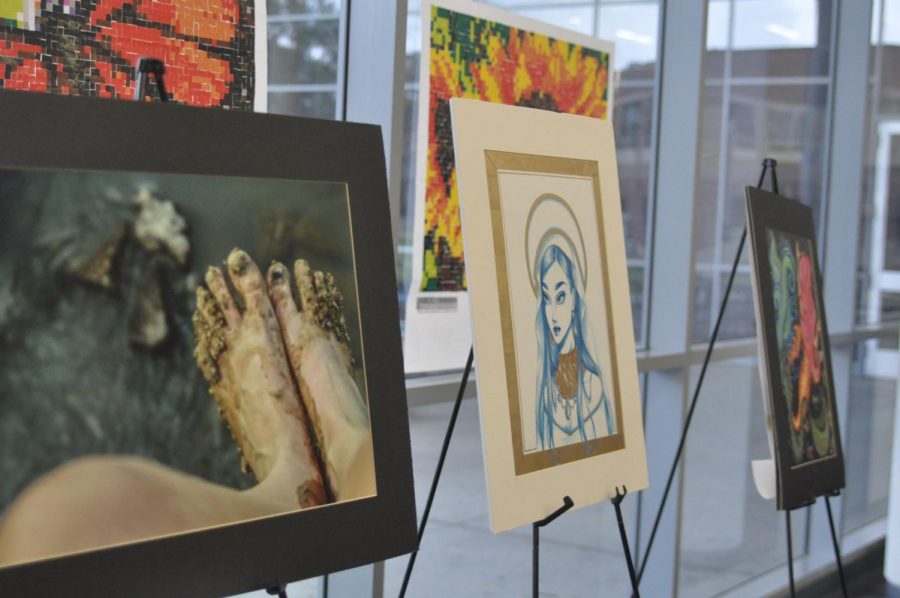 VASE was held Feb. 17, and artworks were later put on display in the Klein Collins library.

The regional Visual Art Scholastic Event (VASE) was held at Klein Collins Saturday, Feb. 17. VASE gives students a chance to present artwork to a judge. It is a large event in which thousands of high school students from several different schools gather to show their work. According to sophomore Rachel Thomlinson, VASE is an opportunity to see the creativity of others.

“[The best part of VASE is] getting to see everyone’s different creations and how far a mind can be stretched,” Thomlinson said. “It gives art, a solitary thing, a chance to be talked about in front of a judge.”

Unlike other art shows, regional VASE has students talk with a judge about their piece, and they are able to explain what it represents and why they made it.

“I have the ability to be interviewed and speak about my art,” senior Connor Ferrell said. “That is rather than it being sent somewhere for someone who will never hear my side of it to judge.”

Students are allowed to enter up to two art pieces in VASE depending on how many art classes they have. Each entry is graded on a scale of one to four, and only fours are able to advance to state VASE. Thomlinson believes that her pieces are important, and she is “hopeful” that she can make a four.

“[VASE is] a chance to show off my art,” Thomlinson said. “[My artwork represents] trying to maintain a connection with someone who’s slipping away due to mental illness and trying to keep a grasp on them and keep them here.”

VASE has become very popular among Texas high schools. Several hundred students from the region participated in the event this year. According to art teacher Ramona Britt, VASE is an opportunity to show art and see the work of other students from different backgrounds.

“They get invaluable experience to see all kinds of artwork of all different levels and from all kinds of schools,” Britt said. “It is the only art event of its kind for junior high and high school students.”

Britt says that there are many different reasons for people to choose to participate in VASE.

“Some do it trying to letter in art,” Britt said. “Some do it because if you make it to state, colleges will hand out a full ride if you’re good enough. But mostly they do it because they like art.”