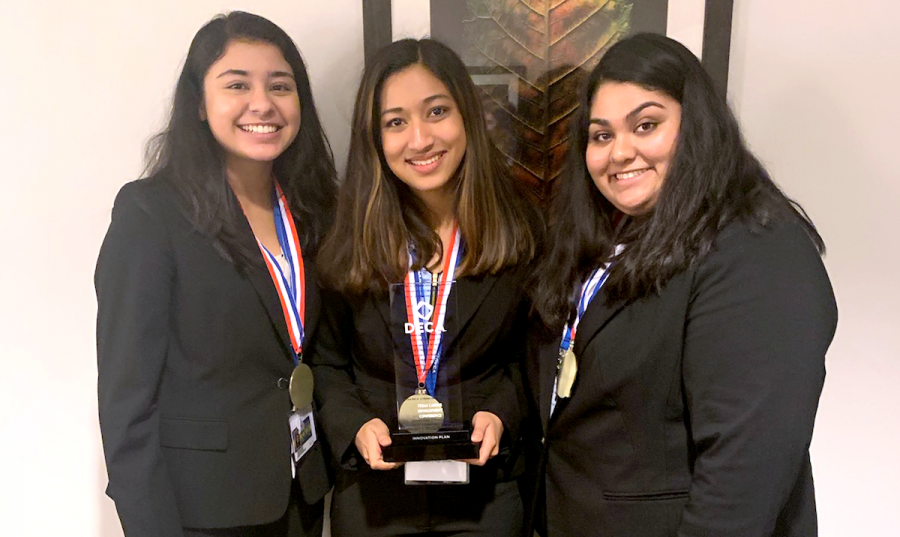 One of the hallmarks of the DECA Nationals competition is the trading of pins between clubs.

After competing in the DECA State Competition, DECA finalists juniors Asmita Karmakar, Haadiya Jamal and Megha Sengupta will advance to the national-level event taking place next month in Orlando, Fla.

“I think at the bottom of it all, the product we created is what set us apart from the competition,” Sengupta said. “We designed [a device] that can be used in emergency situations, specifically sexual assault scenarios. I think the judges liked that we were trying to tackle a real-world issue that many other kids our age have had experience with. Also, the color scheme on our paper looks really good.”

There are three levels of DECA competitions, including Area (Districts), State and Internationals (Nationals). Students can compete individually or in teams in more than 50 events based on six different career clusters.

“DECA is an academic club,” DECA sponsor Brenda Vines said. “We do compete, but you’re not required to. It is highly encouraged, though. You can take tests and do a roleplay, or you can write a paper and do a presentation.”

Karmakar, Sengupta and Jamal participated in the Innovation Plan event, a team event consisting of writing a business plan and presenting it to the judges.

“The Innovation Plan event can only be up to 10 pages, but most of the written events [require up to] 20 pages,” Karmakar said. “It’s really detailed. When we were deciding what event to choose, we chose the one with the shortest amount of pages to write. You have to write your executive summary – what your mission statement is and what you plan on doing and what problem you’re trying to solve, then the features – your customers, who you’re trying to market towards, your unique value and your conclusion. It’s a written event, so the judges evaluate our paper and on top of that, when we go to compete, we have to give a presentation separate from the paper.”

According to Karmakar, “it was really hard to come up with [an idea] because we wanted it to have some significant value.”

“We decided to focus on an issue we had,” Karmakar said. “We started with our everyday lives, but then we decided to do more of a social issue, like sexual assault. We decided to create a personal safety device. It’s called the Clovis. It is named after a German warrior, to fight off all the evil people. The Clovis is a personal safety device primarily designed to be worn as an earring, but there is also a magnetic set [available]. It has touch-sensing capabilities so you can pair it with an app on your phone.”

Karmakar and Sengupta joined DECA last year, but did not advance past the State competition. Karmakar said she credits this year’s success to the compatibility of her team and the type of event they competed in.

“Last year when I competed, I did a roleplay event, which a lot of people do, so it was really competitive,” Karmakar said. “I realized maybe that wasn’t the best for me, and wanted to focus on my strengths. This year, my group and I realized we should do a written event because we realized that we work better together if we prepare beforehand. One of our strengths [as a team] is lifting each other up. If someone else forgot what they were supposed to say, we stepped up for each other and helped each other out.”

In 2018 one DECA finalist, senior Mauricio Duran, advanced to Nationals. According to The difference between last year’s DECA performance and this year’s is the extra practice time and club involvement, according to Vines.

“We did a little bit more preparation this year,” Vines said. “We had a social after school one day. We also took people to do practice role plays, which was a required meeting, so that seemed to be helpful.”

The competition process for DECA Nationals is slightly different from Area and State.

“The students compete, finalists are announced, and then those finalists compete again,” Vines said. “It’s a double competition. From those finalists, they will take the top 10, and winners get a trophy.”

The DECA Nationals tournament will take place April 26 in Orlando, Fla. In addition to competing in Orlando, DECA students from all Klein high schools will visit Disney World and Universal Studios.

“I really hope that the Clovis does well at Nationals,” Sengupta said. “I’m not really sure how far we’ll advance because apparently our event is one of the most competitive and only like 10 out of hundreds of competitors are named finalists. But I think we have a really strong product, paper and team, which means we have a fighting chance.”