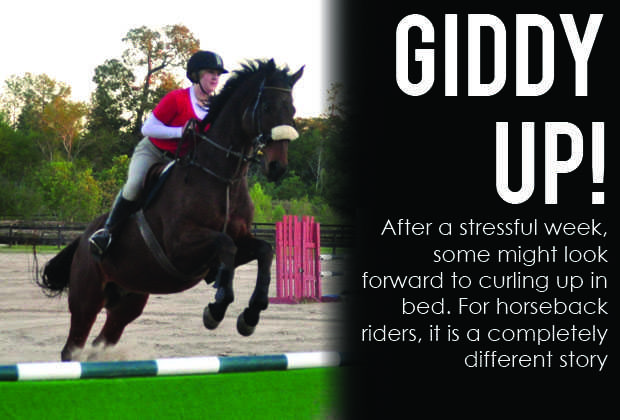 After a stressful week of homework, some people look forward to curling up in bed and spending the night on their computer. For horseback riders, it is a completely different story. When they have even a second of free time, they spend it dedicated to riding and taking care of their horses.

Although it may seem easy, horseback riding can be more challenging than people realize, according to senior Zachary Rowe.

“Most people think it’s as easy as hopping up onto the horse and just going, but it’s so much more than that,” Rowe said. “It takes a lot of energy and effort to even stay on the horse. It’s all a really complicated process and there are a lot of different parts to it.”

“I feel like Western is more showy, with the cowboy boots and jeans,” Ferguson said. “With English it’s more professional looking and that’s why I like it better. They’re both an equal amount of work and dedication, they’re just different.”

Rowe said he gets upset with people when they say horseback riding is not a sport.  He feels riding teaches a person about dedication and shows them the meaning of hard work.

“If you don’t have time to ride every day then you can just forget it,” Rowe said. “It takes a lot of motivation and it basically becomes your whole life. If you think horseback riding isn’t a sport, then you just haven’t tried it. You have to try it and put time into it to realize how hard it is.”

“It’s changed my life a lot because it’s a way to get exercise and express myself,” Potter said. “If I’m having a bad day I can just go and work off my emotions and work with my horse. It’s really rewarding when I get my horse to do what I want it to do.”

According to Potter, working with her horse has a positive impact on her life that not many other things can bring. After ten years of riding, Potter said she feels a major change in herself and her relationship with her horse.

“If I’m having a really bad day, my horse is just there for me,” Potter said. “This might sound weird, but I feel like I can tell him all my problems. Even though he doesn’t know what I’m saying, he’ll give me this face and I know he’s listening. He’ll look at me and nuzzle me and bump my arm and nibble on my hand. He makes me feel so much better. It sounds crazy to people who don’t have horses but once I form that connection, I could really trust him.”

Senior Elyssa Niebel looks forward to riding her horse every week and considers it a big part of her life. She understands the special connection riders feel with their horses and feels it with her own horse.

“My horse is pretty friendly towards everyone,” Niebel said. “He usually behaves no matter who rides him, but when I’m with my horse I feel that connection and it’s different. It’s a really personal experience.”

Along with the connection, Ferguson describes the discipline required in caring for a horse. She never uses a whip or crop on her horse, but admits she has to be firm sometimes.

“My relationship with my horse is different than one with another animal like a dog, because I don’t ride my dog,” Ferguson said. “With my horse, when we’re in the arena it’s work. It’s like a job. My horse knows what he’s supposed to be doing and how important it is and he knows that when he performs the right way he’s going to get rewarded and when he doesn’t he’s not going to get rewarded.”

Not only do the horses get rewarded, but the riders get awarded as well. Ferguson recently won third place overall at a competition.

“I have won some awards,” Ferguson said. “Competition season just recently started. I love competing. I love the feeling of getting in the arena and the judge watching you and everybody around you watching.”

Horseback riding has shown to be a commitment of time and devotion, but at the end of the day, some riders find it to be worth it.

“It’s my life,” Ferguson said. “It’s my passion. Sometimes it’s the reason I wake up in the morning. I look forward to it every week.”