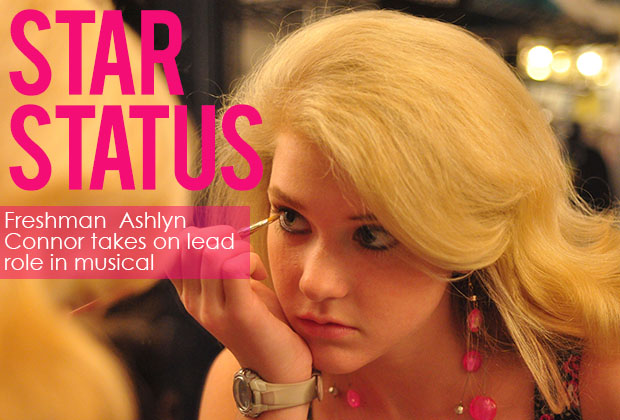 Emotions rush as freshman Ashlyn Connor prepares for her first show. The craze of things backstage only adds to the intensity of the moment. The crowd waits for the show to begin, as Connor takes a deep breath and prepares to give the performance of a lifetime.

Connor was casted as “Elle Woods” for the school musical, “Legally Blonde.” Only a freshman, she was surprised to receive a lead for the school’s major production.

“I was completely not expecting to get the lead,” Connor said. “Even though I wanted the lead more than anything, everyone told me seniority rules, and I accepted that. It was just overwhelming because I was so thankful and so excited when I found out.”

Although Connor was surprised by the lead, theater teacher Robin Welch saw her potential from the beginning and considered her a perfect fit for the part.

“It wasn’t a surprise to me,” Welch said. “I was just excited that she got the part because she fulfilled all the things we needed for an ‘Elle Woods’. She definitely looks the part. On top of that she can sing, she can dance and she did a really great job on her acting audition.”

Most of Connor’s peers agree with Welch. Choreographer Ginnifer Joe noticed that Connor had no trouble learning and working with all of the material.

“When I saw Ashlyn got the lead as a freshman, I was hoping she’d be able to keep up with everything and play her part well,” Joe said. “She actually does better at her part than a lot of the upperclassman. She can catch on to choreography quickly.”

Connor slowly steps onto the stage, ready for her performance. After long rehearsals and lots of practice, she begins. Nothing else matters as she stands on the stage. The audience watches in awe.

Junior Jackson Nusser feels Connor can easily play the part of Elle because of their similar personality traits.

“Elle has to be really nice,” Nusser said. “That’s easy for Ashlyn, she can just go on stage and be herself. She’s very kind and caring towards others and she definitely puts other people before herself.”

Connor also feels a personal connection with her character and feels she can relate to some of the experiences and obstacles that her character faces in the musical.

“I’m really similar to Elle,” Connor said. “We’re both judged because we’re blonde. I like to consider myself intelligent but I am discriminated a lot because I’m blonde.  I think we’re similar in that way. We’re both really happy and peppy people as well.”

Welch believes that Connor has grown as a person because of this experience and knows that Connor will excel at whatever she chooses to do.

“I see her confidence building every day,” Welch said. “I believe she has a bright future ahead of her. She’s the kind of person that whatever she chooses to do, she’s going to do it because she’s got that dedication and the drive to achieve anything.”

Connor also feels she has learned from this experience and gained unforgettable memories. Despite the musical coming to an end, she wants to continue to perform.

“I just don’t know what I’d do with myself if I didn’t have preforming,” Connor said. “I can’t wait to keep preforming. The musical has been such a great experience and I’ve met so many great people. Even the people you don’t expect yourself to be friends with, turn out to be one of your best friends. The other cast members have helped me improve my acting and performing. I’m never going to forget this experience and everything I’ve learned from it.”