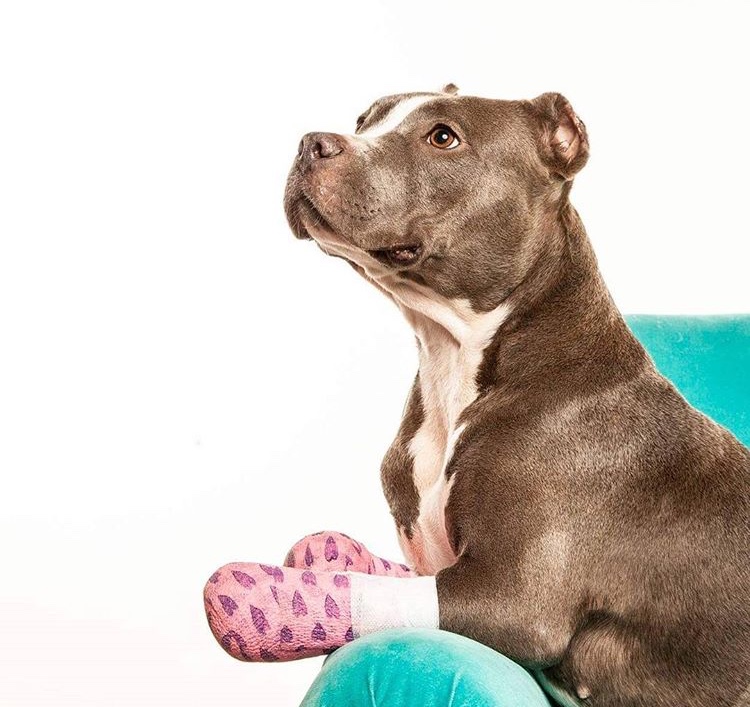 Liberty’s family took her to a professional photoshoot to have pictures for further getting her story out to the public. “Getting Liberty broke my heart at first, and I instantly fell in love with her,” senior Hailey Shores said. “Every day I come home and see her big smile, and it makes even the worst days a little better. She is truly a blessing, and I am so glad that my family is able to be there for her just like she is there for us.”

In attempt to raise awareness about animal abuse, senior Hailey Shores brought Liberty, a disabled dog that her family fosters, to the teaching theatre for all students enrolled in science teacher Kristine Capuano’s Environmental Systems class to see. Liberty was brought to the school by Hailey on Monday, Oct. 9, and she visited with Environmental Systems students throughout the entire school day.

“[I] talked to all the classes and just tried to raise awareness for animal abuse of all kind,” Hailey said. “[My mom and I] are trying to get Liberty’s story out there while also trying to get people to adopt animals instead of buying them.”

In each of Capuano’s Environmental Systems classes, Hailey presented a PowerPoint that she created and told the class about Liberty’s past.

“I made a PowerPoint, and I showed pictures from when my family first got Liberty,” Hailey said. “I talked about how Crime Stoppers has a $6,000 reward for anyone who knows anything that happened to her. We showed pictures of her surgery that happened. Her pinky and philangees needed to be amputated. We also let everyone pet her and love on her.”

Hailey’s mother, Christina Shores, worked for animal control and for Texas Animal Society for over 10 years before switching jobs in August, and she received the call about Liberty.

“My mom was the animal control dispatcher that got the call about Liberty, and there was a language barrier between her and the guy she spoke with,” Hailey said. “The guy told her that the dog had no feet, so my mom sent an officer out. The officer sent my mom a picture, and Liberty did not have any paws. We’re not sure exactly what happened to her, but we know that some terrible person cut her paws and ears off with house scissors. If it wasn’t for the fact that Liberty found dirt to clog the blood of her major arteries, she would have bled out.”

A few weeks ago, Hailey discussed bringing in Liberty with Capuano. After receiving approval from her teacher, Hailey went home and asked Christina if bringing Liberty to school was something she could do.

According to senior Franky Lerma, seeing Liberty was a great experience and was more heart-wrenching than it was anything else.

“Seeing Liberty saddened me,” Lerma said. “There’s a lot of animal abuse across America, and animals do nothing to deserve it. But overall, it was a good experience seeing a gorgeous dog who’s made the best out of her situation, and she has taught me more about the animal abuse that goes on around the world.”

According to Christina, when she first heard of Liberty’s extremely poor physical state, there was not a doubt in her mind that she and her family would be the ones to care for the dog.

“I’ve been fostering and rescuing and have been in animal welfare for over 10 years,” Christina said. “When [my family] fosters, we usually foster animals that are going to be euthanized. We like to pull the ones that are very medically sick. So, when the animal control officers sent me a picture of Liberty, there was no question that she was going to come to our house and that we were going to be the ones to foster her.”

According to Hailey, when deciding to bring Liberty to school, there was one goal in mind and one goal only: to spread awareness about the horrors of animal abuse of all kinds.