Gender expectations can restrict people of all genders from being themselves 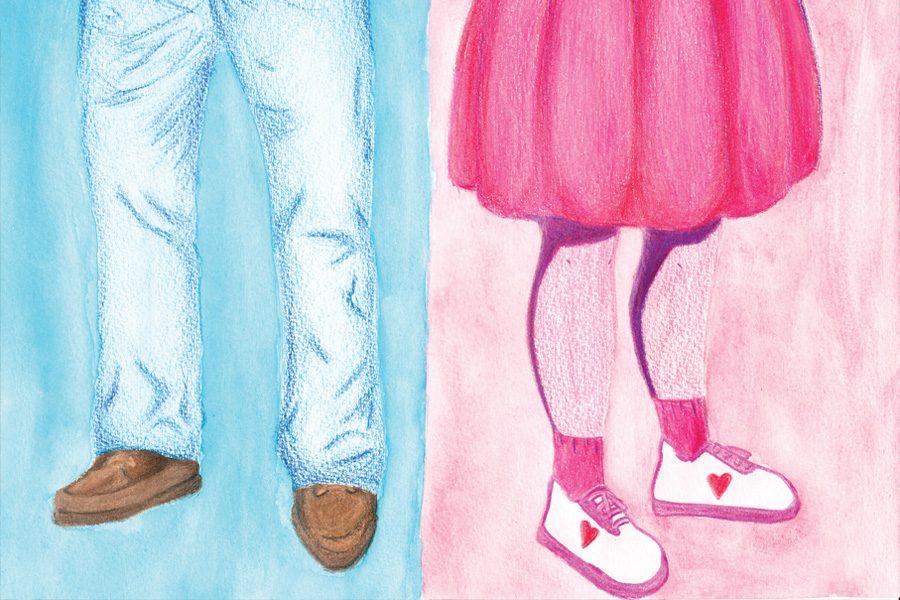 This drawing by Kristen Conklin shows the stereotypes of men and women.

It starts the moment a baby is born. Blue caps for boys and pink bows for girls. Gender influences everything from colors to careers, continuing throughout adolescence. Pink is a girly color. Only boys play football. Girls can not do this. Boys can not do that. These ideals are part of a broken and outdated record that has been playing for far too long.

There are many people that dismiss the impact gender stereotypes have on modern day society, believing that gender stereotyping is normal and harmless. Gender profiling has become so normalized and widely accepted that the people causing the damage are not even aware of the effect their words and actions have on other people. However the impact is real, and the need for change is more prevalent than ever.

Gender stereotypes can create unfair biases about certain characteristics or traits that apply to each gender. If a man or a woman acts differently from how their gender is expected to behave, they have the potential to be looked down upon and even harassed for it. For example, assertive women are sometimes referred to as “bossy,” while men who do not appear masculine are scrutinized for being “weak.” It is clear that gender stereotyping is a growing epidemic that plagues young minds with doubt and a lowered self-esteem.

Society’s male stereotypes thrive on the idea that men should act “manly,” and that they are expected to be tough, dominant and self-confident. These toxic ideals can lead to many psychological problems among young men. According to the American Foundation for Suicide Prevention, at least three boys commit suicide every day in the United States. Oftentimes, young men are told to swallow their feelings and emotions. “Man-up” is the phrase so commonly thrown at men. The suppression of any young person’s emotions can lead them down a path of anger, violence and depression. The frustration to fit the stereotype of being a “real man” can quickly manifest into shame and humiliation that defeats self-esteem.

Women may also struggle to keep up with their gender’s facade. Girls are too often raised with the idea that their worth is based on their domestic skills and physical looks instilled in their minds. Many young women have a seed planted within them that makes them believe that if they are not visually appealing, they will be completely dismissed by the outside world. According to HealthyPlace.org, “60 percent of people who participate in self-harm are females between the ages of 13 and early 20s.” This harm stems in part from body image issues brought on by impossible standards girls seek. Society forces its inhabitants to hide themselves behind a false state of self, and it is not long before men and women become prisoners to it.

It seems like the worst thing that someone could call a person is the opposite gender. It seems like no matter what a person does, it will never completely satisfy the expectations of society. But why live life the way everyone else says life should be lived? Gender stereotypes are at the center of a society that believes that a person’s worth is based upon the color of their outfits and the hobbies that they pursue. No one should feel pressured to prove themselves against a subjective gender ideology or modify their personalities to fit someone else’s definition of perfection.