Senior is first to join all three music organizations 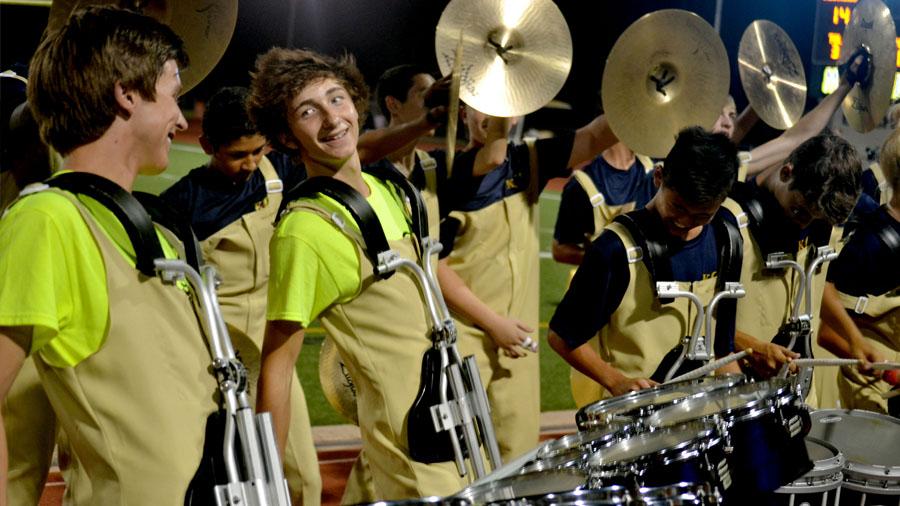 Senior Cole Corbett plays along with the drumline at the homecoming game.

This is the average day for music fanatic senior Cole Corbett, who is the only person in the history of the school to be in the top group of each music organization. Music is a way he can express himself.

“It’s almost like a drug in a way,” Corbett said. “It can be addictive, but instead of negative effects, it only has a positive one on my life.”

While most percussionists joined during their junior high years, Corbett made the brave decision to join his freshman year of high school. Corbett feels that many doubted his ability since he had no experience, but he believes he proved himself by making Freshman Region Band and trying his hardest every day.

Sophomore Jackson Lightfoot stated that he is impressed by how much Corbett has managed to accomplish in his short time at the school.

“He’s played every single instrument in marching percussion,” Lightfoot said. “His freshman year he was in the front ensemble, sophomore year he was on bass, junior year he was on snare, and this year he’s on tenor. He’s the first person to ever do all four.”

According to Lightfoot, Corbett has a passion that seems to be greater than others when it comes to music.

“It’s really part of who he is,” Lightfoot said. “He’s definitely got a lot of natural talent. It’s like all he does is music.”

Corbett began his journey on the violin in the “Fifth Grade Strings” program, playing the instrument all throughout his grade school career. His dedication to the instrument earned him a spot in the top violin section in the top orchestra. Fellow violinist senior Andy Chui believes that Corbett has extremely high capabilities when it comes to music.

“He can learn everything himself really quickly,” Chui said. “I know he likes music, but he’s better at it than a lot of other people.”

As far as stringed instruments go, Corbett mainly plays the violin, but has experimented with the viola and harp. In October, Corbett decided to compete in a regional competition on the viola, an instrument that he does not even play, and still managed to place in the competition.

“I spend a lot of time learning new instruments,” Corbett said. “I take every opportunity when it comes to music. It’s my passion.”

Trying new things seems to be Corbett’s forte. He stated that he has always had interest in singing, so he made the decision to join choir. Choir director Kasey Pope feels Corbett has adapted well to the class.

“I think it’s a pretty easy transition from one group to another,” Pope said. “When someone’s been in one group they know what it’s like to be in another. His prior musical experience in band and orchestra significantly helped him be more advanced in choir.”

Although Corbett has shown significant musical talent throughout the three groups, the future is still something he feels he should consider.

“I’m going to start out with an engineering degree and maybe minor in music,” Corbett said. “I’ll go back to music once I’m well off money wise, but I’ll always try to find gigs or maybe play with the symphony or something.”

Corbett believes that music is a force that bring people together like no other, saying that although people feel and experience it differently, it still causes people to feel emotion.

“It’s interesting that even though music has no intrinsic value when listening to it, it still gives people that profound rewarding experience,” Corbett said. “I can make something beautiful and express myself at the same time, it’s like my own creation, and it’s something that I’ll never let go of.”