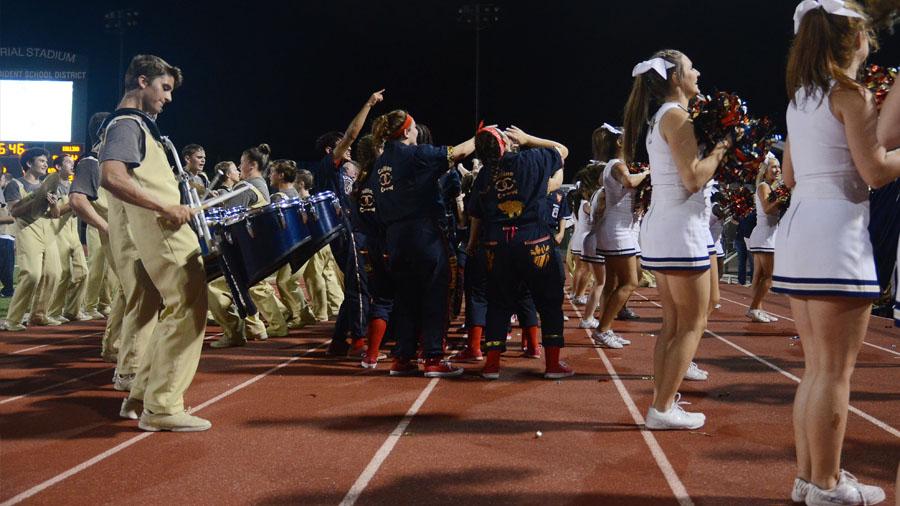 Drum line, Collins Crew and varsity cheerleaders all try to hype up the crowd together. (Kaiti Neuman / Legacy Media)

Drum line, Collins Crew and varsity cheerleaders all try to hype up the crowd together.

Stars of the sidelines

At each varsity football game, groups including cheerleaders, Collins Crew, the marching band and student athletic trainers support the players on the field.

Cheerleaders attend every varsity football game and pep rally to contribute to a positive atmosphere according to varsity cheerleader junior Savannah Rios.

“We’re at football games to pump up the crowd and the players,” Rios said. “We lead cheers during the game and encourage good sportsmanship.”

Collins Crew is another organization present at every game to hype up the crowd according to Collins Crew sponsor Amber Wallace.

“Collins Crew can come in and be silly and a little more extroverted compared to other organizations,” Wallace said. “They’re not as contained or controlled. Everyone involved works very diligently, helping cheer on the boys and getting everyone hyped when they make those plays.”

The marching band also performs at every football game, cheering on the players through stand tunes and a halftime show.

“A football game without marching band is like sitting on the bus with no headphones,” band member junior Alexandra Nuyda said. “It’s quiet and lonely.”

“No one would be able to pick up the players whenever they fall down,” athletic trainer junior Allie Hess said. “We have multiple injuries every game. People don’t realize it, but we actually are really essential.”

A variety of organizations come to football games to make the night enjoyable according to junior Chi Ying Chan.

“There are a lot of groups that work hard to make the magic happen,” Chan said. “I love that. Groups like Collins Crew and the cheerleaders always try to get the audience hyped up. They make the night as fun as possible. There is definitely a sense of camaraderie in the stands because we’re all here to support our team.”