J.J. Watt, pictured above, places a box of relief supplies in the back of a vehicle on Monday, Aug. 27 2017 (Brett Coomer/Houston Chronicle via AP, Pool)

Watt has impacted Houston on the field by being one of the best defensive linemen ever to play the game, but Watt is known for more than just his work on the field. 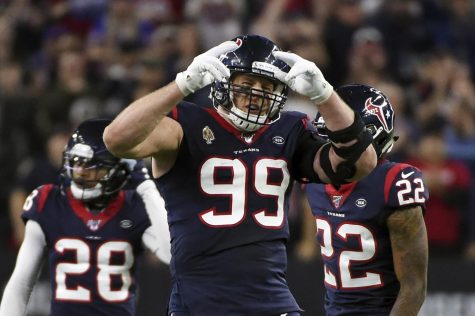 J.J Watt has done so much for Houston, but one of his most renowned  accomplishments has been helping families after Hurricane Harvey.

During 2020, Watt was in the talks of leaving the Texans for a team that could compete for a Super Bowl in the next few years. The Texans won’t be contender for a while because there is a lot of drama down in Houston right now.

On March 21 of this year Watt signed with the Arizona Cardinals for a two-year contract and 31 million dollars and will be joining his former teammate DeAndre Hopkins. Hopkins was traded last year by the Texans on March 22, 2020. J.J Watt will go down as one of the best players to ever put on a Houston Texans jersey.