DO NOT Watch ‘The New Mutants” 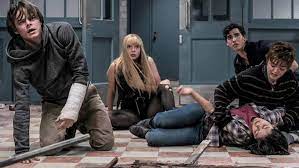 As a long-time Marvel fan and a lover of the X-Men franchise, I was super excited to dive into The New Mutants movie and its dark take on the lives of mutants within the Marvel Cinematic Universe. In the other X-Men movies, some characters have twisted backstories and angsty pasts, but I’ve yet to see a Marvel movie as sinister as this one.

Despite this, I expected the horror film to be a lot more terrifying when I first watched the trailer. Even with the great acting, the film could’ve been executed a lot better, and as a lover of all things superheroes, I was fairly disappointed. The New Mutants film came out in 2020 and is the thirteenth and final installment in the X-Men franchise, which makes the outcome of the movie all the more disheartening.

The New Mutants was rated 35% on Rotten Tomatoes, and I couldn’t agree more with the low rating.

Unlike the others, this movie strays away from the original storyline, including Charles Xavior’s School for Gifted Youngsters and its original characters. Though they are mentioned once, insinuating the new mutant characters are in the same universe. This is the most disappointing revelation within the whole movie. Despite being in the same universe as the X-Men, the new mutants have absolutely nothing to do with them and are basically side characters in the universe. If this is the case, the franchise should’ve ended with the Wolverine film and the new mutants could have their own franchise.

The plot of the film is obviously rushed and choppy. This is due to the fact that the production of The New Mutants had been delayed by 21st Century Fox multiple times, to the point where the actors had aged too much to continue reshooting. This led to a series of complications within the movie: there was no character development nor was there context of why the asylum exists and what Dr. Reyes’ motives were for trapping the mutants.

To say The New Mutants was disappointing would be an understatement. I wouldn’t recommend this movie to fans of X-Men. The film contributed absolutely nothing to the franchise and was lacking in action, plot and many more essential elements to the makings of a decent movie. Although The New Mutants has earned my disapproval, I still have hope for the new Marvel movies to come.